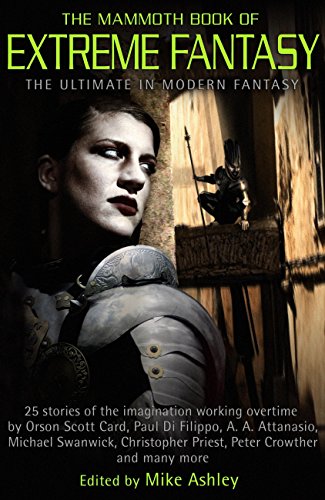 In extreme fantasy anything can happen. In Mike Ashley's breathtaking new anthology the only rules are those the writer makes - these are stories to liberate both the writers' and readers' imagination. They will take you to hell and back (literally - two of the stories involve hell in ways never explored before).

For too long fantasy fiction has become synonymous with vast heroic-fantasy adventures in imitation of The Lord of the Rings, but the genre has always been far greater than dwarves and elves. Today many writers are rediscovering the wider world of fantasy and creating bold new ideas or magically reworking older arts.

The anthology opens with a story that takes us beyond Middle Earth in 'Senator Bilbo' by Andy Duncan - showing what happens when a radical descendant of his famous namesake tries to introduce immigration control - and reaches the ultimate in 'The Dark One' by A. A. Attanasio, a rite of passage story where you, the reader, discover you are being tested to become the successor to Satan.

A man with a terminal disease looks for a cure in a world where Edward Lear meets Lewis Carroll.
A man decides to banish all language.
A tour of Hell by the boatman himself.
The great comic stars of Hollywood find themselves seeking their lost world.
A magical experiment recreates the Crucifixion.
Suddenly all colour drains out of the world.
A magical recreation of Chinese fantasy cinema where a magician and his adepts fight the flying dead.